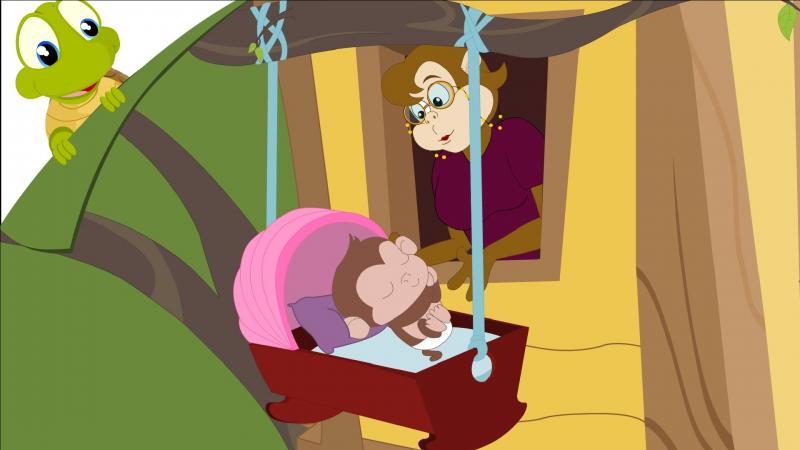 The version from Songs for the Nursery (London, 1805), contains the wording:

Rock-a-bye, baby, thy cradle is green,
Father’s a nobleman, mother’s a queen…

Alternate Lyrics as shown in The Real Mother Goose published in 1916:

Rock-a-bye, baby, thy cradle is green;
Father’s a nobleman, mother’s a queen;
And Betty’s a lady, and wears a gold ring;
And Johnny’s a drummer, and drums for the king.

The most common version used today is:

Various theories exist to explain the origins of the rhyme.

One theory suggests the rhyme narrates a mother gently rocking her baby to sleep, as if the baby were riding the treetops during a breeze; then, when the mother lowers the baby to her crib, the song says “down will come baby.”

Another identifies the rhyme as the first poem written on American soil, suggesting it dates from the 17th century and that it may have been written by an English immigrant who observed the way native-American women rocked their babies in birch-bark cradles, which were suspended from the branches of trees, allowing the wind to rock the baby to sleep. A difficulty with this theory is that the words appeared in print first in England c. 1765.

In Derbyshire, England, local legend has it that the song relates to a local character in the late 18th century, Betty Kenny (Kate Kenyon), who lived with her charcoal-burner husband, Luke, and their eight children in a huge yew tree in Shining Cliff Woods in the Derwent Valley, where a hollowed-out bough served as a cradle. However this “late 1700s” date is incompatible with the poem’s appearance in print c. 1765.

Yet another theory has it that the lyrics, like the tune “Lilliburlero” it is sung to, refer to events immediately preceding the Glorious Revolution. The baby is supposed to be the son of James VII and II, who was widely believed to be someone else’s child smuggled into the birthing room in order to provide a Roman Catholic heir for James. The earliest recorded version of the words in print appeared with a footnote, “This may serve as a warning to the Proud and Ambitious, who climb so high that they generally fall at last”, which may be read as supporting a satirical meaning. It would help to substantiate the suggestion of a specific political application for the words however if they and the ‘Lilliburlero’ tune could be shown to have been always associated.

Another possibility is that the words began as a “dandling” rhyme – one used while a baby is being swung about and sometimes tossed and caught. An early dandling rhyme is quoted in The Oxford Nursery Rhyme Book which has some similarity:

Catch him, crow! Carry him, kite!
Take him away till the apples are ripe;
When they are ripe and ready to fall,
Here comes baby, apples and all, woop woop.

Nursery Rhyme Categories:
Clapping
Nursery Rhymes
Language:
English
Place of Origin:
N/A
“Down Down Baby” is a clapping game played by children in English-speaking countries. In the game, two or more children stand in a circle, and clap hands in tune to a rhyming song. As with most hand-clapping games, there are many variations.
View Rhyme

Frère Jacques (English: “Brother John“), is a nursery rhyme of French origin. The rhyme is traditionally sung in a round.